Dunstone Down to Above Scorriton on the Two Moors Way

For the dedicated car-free walker, this leg of the Two Moors Way route requires planning over spontaneity and on this occasion, a degree of dedication over reason. It being half term, I had freed myself of mid-week parental responsibilities to be able to make use of the once a week bus service from Buckfastleigh to  Widecombe in the Moor. But the rain in South Devon in October works to a more regular timetable - most days and often half hourly - and the week proceeding the event was anything but optimistic.

For the occasion I'd drummed up some company, not just for the moral support and photo opportunities, but also because I expected to complete the route in the post-British Summer Time darkness. The once a week Community Bus provides a life-line for people living in isolated communities to access essential shopping, so is not ideally timed for those visiting for a walk. The bus travels off the moor to Newton Abbot in the morning and returns later in the day, giving two options - an early start from South Brent and the risk of missing the one bus out, or travelling in the afternoon and having a less time dependant jaunt back. From May through to early September the 16 mile route would be possible in either direction, at leisure, in the light. Instead, by necessity we opted for trail shoes and a headtorch for a late afternoon jog. 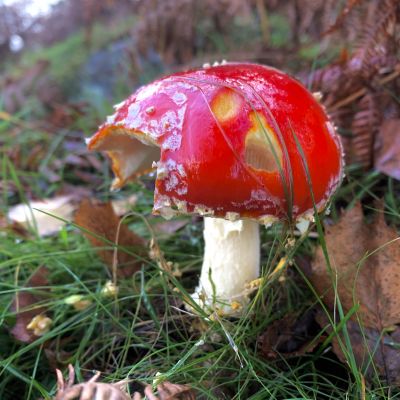 Being Dartmoor, perhaps some pixies were nearby too . . .

Thankfully the bus stop at Buckfastleigh has a shelter. The Met Office had promised a weather window to follow but we remained unconvinced. Whilst only a 10 minute wait, it would have been plenty of time to get a proper soaking before even setting feet in mud. Boarding the Community Bus, the regulars took an interest in our plans, sharing weather-themed anecdotes of their own. The bus driver too had words of wisdom to share, being mid-Two Moors Way route himself. 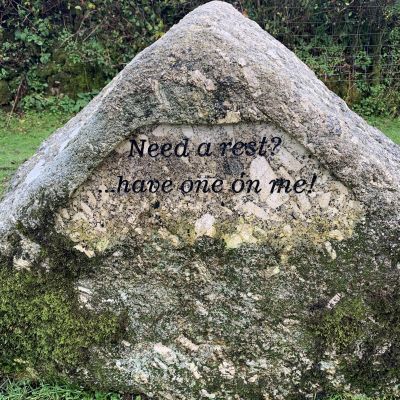 Having just got off the bus, we couldn't really take up the offer

What we hadn't yet decided was how long to stay on the bus. The route passes close to the Two Moors Way at various points before Widecombe - Scorriton, Holne, New Bridge and Ponsworthy - and bearing in mind the lack of daylight hours and inclement weather, we didn't want to over commit. With this in mind we opted to alight near Bittleford Down to join the Way to the west of Wind Tor, avoiding some unnecessary ascent which we'd helpfully already gained by mechanical means. Stretching legs uphill on the minor road we were met by the briefest of squalls but there were some positive signs of a calmer period on the horizon. 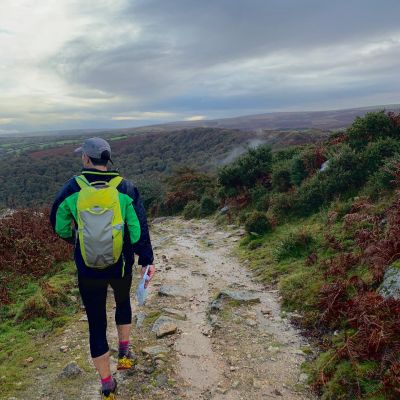 Splendid views across the Dart Valley from Dr Blackalls Drive

Descending down the hill towards Jordan we found our stride and were soon shedding layers. Alongside the river and through the woods there were plenty of puddles and mud to contend with - this is obviously a popular stretch of path for when the higher moor is covered in cloud. From the picturesque hamlet of Ponsworthy, a short sharp road ascent gained height to Sherberton Common, which we crossed over towards Bel Tor, to pick up Dr Blackall's Drive. Given the time constraints already mentioned, it was great to be traveling at a good speed and the miles were already ticking by. I did, however, make a mental note to revisit the route sometime in the future at a more leisurely pace as the autumnal views over the River Dart were quite simply stunning. 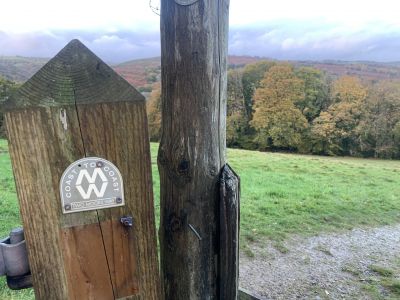 Signage on the route was a bit patchy in places, so take a map

Descending from Aish Tor, the OS map and guidebook gives a couple of choices of route at this point - a high water option via Hannaford Farm, or the normal low water variant along the Dart. Having checked water levels from the bus window earlier we felt confident the latter option would be OK and so it was. The area around New Bridge is one of Dartmoor's 'honeypot' places and there were a few folk milling around near the car park. However they were soon left behind and we enjoyed a canter through the woods before the slog up into the village of Holne.  The Church House Inn looked inviting but shut, which did us a favour bearing in mind the darkening skies and we continued without pause in the direction of Scorriton. Although after 5 minutes we realised we weren't and had to adjust our route a little. A downside of these speedier journeys is a tendency not to consult the map as much as one should. 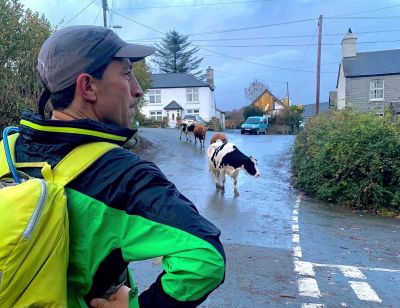 At Scorriton, a quick break was enforced as the local herd made their way down the lane for their afternoon milking. An opportune break, as from there it was a steady 2km climb up a trackway, before a brief dip down to a footbridge across the River Mardle, then up again onto open moorland. By now the light was fading fast and we took the sensible option to walk for a while, reassuring ourselves with the occasional compass bearing to avoid the trap of the numerous little paths and deadends that occupied the hillside. 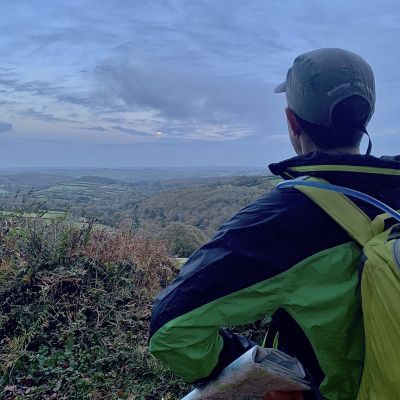 By the time we reached the Boundary Work that had marked the end of my previous stretch of the Two Moors Way, darkness had properly fallen and we were glad of the reassurance of having been here before. On the final stretch back to South Brent, we took our time where we knew we could go wrong and didn't completely relax until we were off the moor and on the quiet back roads to our destination.

On reflection, it was a great afternoon. Travelling (reasonably) fast and (relatively) light, we'd covered the route in slightly under four hours with just one navigational error and plenty of good conversation.

Thanks to neighbourly Dan for the company and photos.