Widecombe in the Moor to Drewsteignton (and a bit more)

Some months had passed since our previous leg of the Two Moors Way had ended in the dark. Since then a new job had lessened the opportunity for mid-week days out and a plan to beat the seasonal heat had been curtailed at short notice due to illness. So the troops (or three of us at least) reconvened on a June weekend not far shy of the longest day, sporting shortish shorts and packs designed for speed.

There is more flexibility in catching a bus to Widecombe in the Moor in the summer months, with the Dartmoor National Park organised Haytor Hoppa running every Saturday from 29th May until 30th October 2021. This year services also run Monday to Friday during the school summer holidays - a really positive step which we hope can be repeated and extended further in the future.

Arriving in Widecombe, the weather was fine and settled and just the right side of warm, which soon became nearer the wrong side as a stiff tarmac uphill took us to our departure point from the previous leg. A quick readjustment of clothing, double check of the map and we headed off-road northwards for an early bagging of the day's high point at Hameldown Beacon (517m). 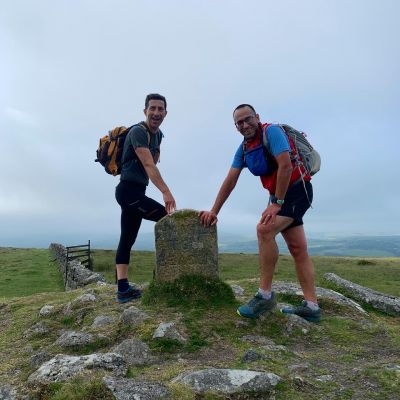 The summer sun was breaking through the cloud as we continued towards the prehistoric settlement of Grimspound, above which it was possible to trace a significant portion of the day's intended journey on the hillscape before us.

The famous fire at the Warren House Inn is only a short detour from Bennett's Cross and might have been a distraction on a chillier day. But we were keen to keep moving and a pleasant tailwind blew us gently down Hurston Ridge, passing grazing sheep and the good wishes of some fellow TMW devotees. 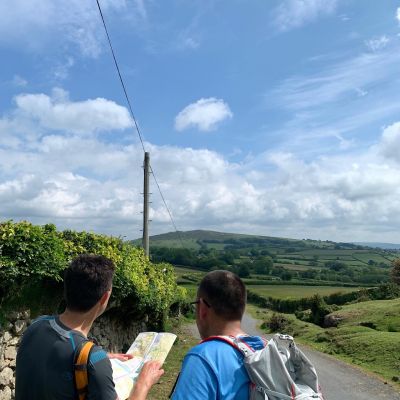 With the uplands behind us, the next 5km or so was pleasantly pastoral - routed through tiny hamlets, ancient tracks and twisting woodland paths unlikely to see much passage if it wasn't for the existence of the Two Moors Way. Chagford Bridge marked the point at which we needed to decide how far to push on. Pleasingly this part of the moor is blessed with relatively good bus links, with the option of a few different services going in several directions. With a bit more left in the legs, we agreed to press on to Drewsteignton where we hoped to gain refreshment before starting our journey home. 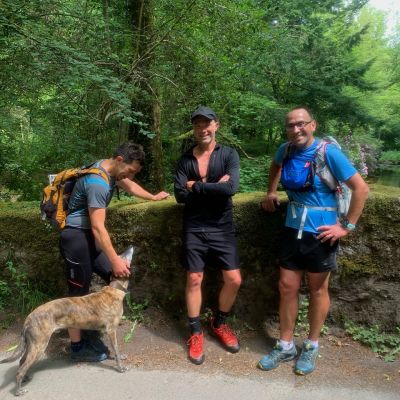 Along the banks of the River Teign we were almost tempted by a quick dip to cool off and even more so seeing the locals enjoying the sunshine at Chagford Open Air Pool. But we pressed on towards the final challenge and the anticipated highlight of the day - the ascent from the valley and the Hunters Park which skirts the perimeter of Castle Drogo. With stunning views across the Teign Gorge and back to the higher moor it was, in both senses, simply breathtaking. 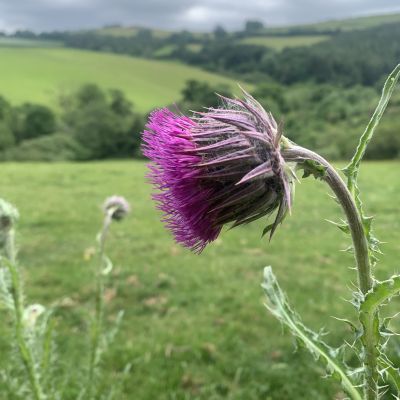 Pasture replaces moorland but the hiils remain steep in places

Alas, arriving in Drewsteignton we discovered the once popular Drewe Arms to be up for sale and the well stocked village shop to have closed for the afternoon. The thought of an hour's wait for a bus without refreshment held little appeal and we opted instead for an off-route exit via the village of Crockernwell and the hope of our elusive reward. Sadly, the only flowing liquid there was a burst water main and our thirst remained unquenched as we sat out the wait in the shelter for our connection home.

Words by Gary. Thanks to neighbourly Dan (photos) and Yousaf (moral fibre).

At the other end, both Chagford and Drewsteignton are served by Dartline service 173 which runs through to Exeter, whilst from Chagford and Sandy Park Inn one can travel to Okehampton and Newton Abbot via Country Bus service 178. We ended up catching the Stagecoach service 6A from Crockenwell towards Exeter - a deviation from the Two Moors Way route with little merit other than providing further public transport connections.