Witheridge to Withypool and the River Barle

It feels like a slightly different world than when I first came up with a plan to do the Two Moors Way (TMW). The seed had been sown in the excitement of relocating to Devon and a shift in lifestyle that allowed a bit more time for adventures and a little less of the '9 to 5'. But as will remain in the collective memory for many years, these past couple haven't been the best for planning. What had originally been a 6 month project stretched and flexed with the lockdowns, a change of job and a realisation that arbirtary deadlines made in the comfort of one's lounge don't really count for anything. 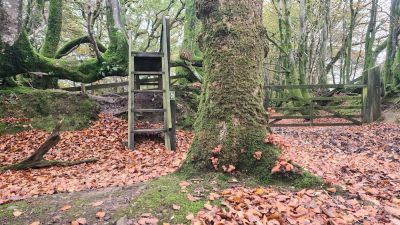 A stile with style

Heading back to the end point of our last leg, I was genuinely excited to be finishing the TMW. It was the first time I had set out to complete a long distance route, and granted, whilst I had chosen to do it in legs months apart, this had arguably added to the challenge with the logistics of getting in and out by public transport. So far this had been possible at the end of each day, sometimes with a few extra off-route miles added to open up options and occasionally being almost spoilt for choice. However, this last 37 mile stretch from Witheridge to Lynmouth, whilst book-ended by bus services was devoid of options anywhere else. The only solution was to make a weekend of it.

Accompanying me on the final stretch was my old pal Yousaf, a veteran of mountain marathons and a fan of traveling light and moving fast. So as we met up at Tiverton Bus Station around noon on the Saturday I was rather delighted to discover that my legs might have felt a little fresher than his and my rucksack a little lighter.

The theme of our previous TMW day had been of one of mud, rain and agricultural mundanity - not that we hadn't enjoyed it, but the route itself hadn't really contributed that much. The first hour or so of the day was similar in many ways, but as we gently rose through the contours things started to look up. As we headed across the road at Waterloo Hill (250m), the landscape notiecably changed and started to resemble the wooden combes of the Quantocks. Towards Knowstone the similarities continued, but after dropping down into Yeo Mill the gradients became steeper and the breeze stronger as we found our way towards the summit point of West Anstey Barrows (356m). By now light was fading and the temperature dropping so we took five to layer up, get headtorches on and distracted ourselves with talk of the evening's refreshments. 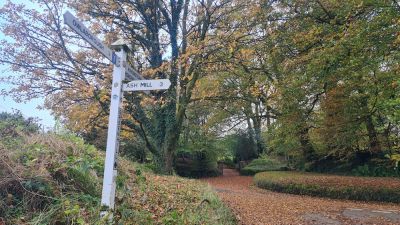 By Hawkridge, it was properly dark and we took the option of the direct road route to Tarr Steps - not a car in sight but may not be recommended in the peak of the summer tourist season. As the steep gradient of the hill flattened out, we met the banks of the River Barle over which the ancient bridge crosses. No doubt a beautiful spot at any time, but a damp evening in November was not the ideal time to loiter. Withypool lies around 4km as the crow flies, but the riverside path felt closer double that as we slipped and slid amongst the roots and puddles, accompanied at all times by the tumble of water, elusively out of sight but holding much promise for the day to come.

So it was two tired, wet and very muddy souls who arrived at The Royal Oak in Withypool, a little later than planned and very much looking forward to the anticipated refreshment. But not before a shower.

Words by Gary. Images by Gary and Yousaf.

Witheridge is served roughly every 2 hours by service 155 between Barnstaple and Exeter (timetable here needs a careful look). It's worth noting the Stagecoach Explorer ticket which provides all day travel on their services in Devon and Cornwall for £8.30 a day (price correct at the time of writing).

The Royal Oak in Withypool, offers comfort, a warm welcome, great beers and the sort of food anyone would welcome at the end of a long damp day. They didn't even mind our mud.