A long Wey to go

As well as extensive sections where the route follows the towpath of the canal, the path also makes use of the trackbed of the former Guildford to Christ Hospital railway (now part of the popular Downs Link cycle route), and a mixture of footpaths, bridleways, quiet country lanes and the very occasional busier road. 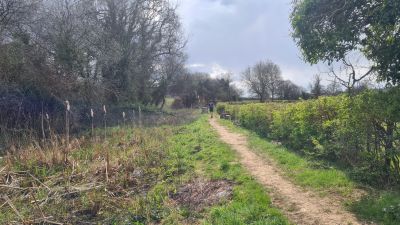 A typical scene on the Wey South Path

For the car-free walker, the route can be accessed easily at either end by train, with options for in/out bus travel at various points en route for anyone looking to break up their trip. For reasons of wanting the challenge, we decided to complete the route in one very long but very enjoyable day. We managed it, but with sore legs and a sense that we could (or should) have lingered more. 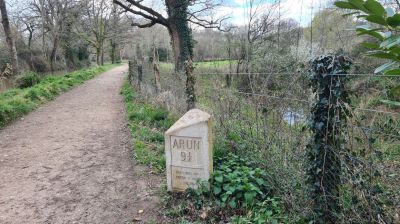 Anyone planning to do the route should be aware that despite being in the south east of England, the route is surprisingly rural and opportunities to pick up provisions/top up bottles are few and far between. The Onslow Arms in Loxwood and White Hart near Stopham Bridge helped keep us moving.

To get hold of a great little guidebook of the full Wey South Path visit the Wey and Arun Canal Trust. They are the group slowly bringing the canal back to life and deserved of your support.

Guildford is easily reached by train from London, Clapham Junction and the Sussex/Hampshire coast. Amberley station is on the Barnham to Three Bridges line and is served by (mostly) hourly 'stopping' services.

Words by Gary. Thanks to Yousaf, Harry, Tom and Andy for helping the miles count down.