A pilgrimage to Trainspotting

Corrour Station, on the northern edge of Rannoch Moor, lays claim as the highest station in the UK at over 1,300ft above sea level

Perhaps more famously, it also features in the film version of Irvine Welsh's bestseller 'Trainspotting', as the location where Renton, Spud, Sickboy and Tommy, in a more wholesome moment in their recreation, decide to go for a walk. As Tim's 8th favourite film ever, what a great place to follow in their film star footsteps, we thought. 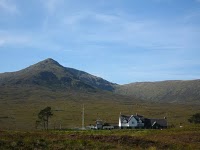 The benefits of a small bit of planning shone through as we succesfully met up on board the West Highland Railway train at Rannoch Station – Tim over from his new home in Germany, me (not so) fresh from the overnight journey on the Caledonian Sleeper from London. The sight of my friend, a died-in-the-wool (and some may say, mildly self-righteous) vegetarian, armed with a bacon sandwich and cup of tea, was almost enough to move my sleep-deprived eyes to tears. 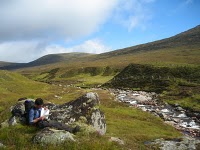 As well as being the highest station in the UK, Corrour is also said to be the most remote, with the nearest public road-head being quite some distance away. As such, it's a prime location for the adventurous walker aiming to get away from the four-wheel dependent crowds. Being a weekday in mid September, we were two of only a handful to alight here, stepping out into blue skies and with joy in our hearts. As Welsh's character Tommy says, 'Doesn't it make you proud to be Scottish?'

The weather forecast for the day had been noticably vague, so we had made no definite plans for the first of this two-day trip. But with a cloudless sky and only light winds, we hit upon a route over the hills to the bothy at Loch Ericht, returning to Loch Ossian Youth Hostel near Corrour for the following night.

Heading east from the station, the access track to the hostel was a gentle start to the day and an opportunity to loosen the limbs after the last 12 hours spent aboard a train. Our first peak of the day was Carn Dearg, which at 941m offers an impressive vista in all directions, most notably back towards Ben Nevis and the Grey Corries. Tim claims that after lunching in the lee of a comfy rock, I stole a short snooze, something I appear to be making quite a habit of on these trips!

Refreshed and revitalised, backpacks were slung across shoulders and we headed forth to ascend the twin peaks of Sgor Gaibhre and Sgor Choinnich, then on to Meall a Bhealaich, where I was reminded of the joys of the South West of England Coastal Path – the reality of travelling only a little horizontal distance forward on the map for considerable expenditure of energy.

Maybe we were both lacking a bit of mountain fitness, or just getting a bit lazy after a busy summer, but we opted to divert away from the final planned peak of the day, Beinn a Chumhainn, and headed instead for the valley of Alder Burn and the footpath to Ben Alder Cottage. The night was spent there in comfort and warmth, the midges only a mild irritant that did little to distract from the beauty of the place. The stars were something to behold as they reflected off the water of the loch, and the bottle of whisky, nobly carried by me, led to a philosophical conversation and a solid sleep. 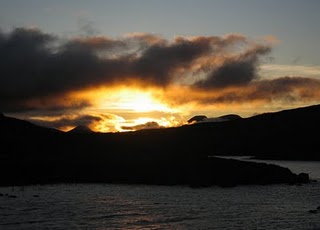 The next day dawned another fair one, and we set off at a good hour to attempt Ben Alder by way of Bealach Breabag and Sron Bealach Beithe. Disappointingly, the summits themselves were cloaked in a damp fog, so with little reason for hanging around we descended by the natural line of the mountain's western spur to find the path alongside Uisge Labhair.

From here, the undulating path was surprisingly tiring as we headed downhill for several miles to Corrour Lodge. With weary limbs, the final miles around the banks of Loch Ossian were a challenge, and it was with relief and flagging energy levels that we arrived at our overnight accommodation.

Our stay at the YHA Loch Ossian was a real pleasure. Our welcoming host made a good fire, and the guests for the evening made for entertaining conversation. A stunning sunset and a good night's sleep cleared the head, and with the spring returning to our step, we caught the mid-morning train back to civilization.

Posting by Gary, photos by Tim