During the winter months in Scotland, the weather can change hourly and only a fool would pre-empt the forecast more than a day in advance. However, on this occasion, good luck was the reward for some advanced planning and the three of us were provided with some of the best mountain days ever experienced. Our adventure took place over three days, journeying where our curiosity, heavy packs and the avalanche warnings would allow. 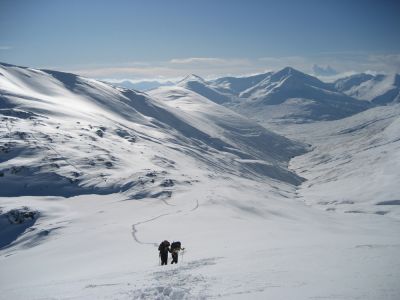 Starting from Corrour Station, we passed the shores of Loch Treig to the valley of Allt na Lairige and an overnight stay in the bothy at the foot of Stob Coire ne Ceannaine. A sharp frost left us languishing in our bunks a little later than planned, but we did at least surprise the locals passing by; they proclaimed their astonishment that southerners such as us had braved the plummeting overnight mercury!

Departing after a warming breakfast of tea and packet porridge, it was not long before layers were shed due to the warming blue skies and the stiff climb to Stob Ban. From this lofty peak, we could view the stunning ridge above the Grey Corries and, confident that snow conditions would allow a safe passage, this was where we headed - an incredible traverse along the line between Stob Coire Leith and Stob Coire an Laoigh.

Choosing our line of descent carefully, we dropped into the valley of Allt Coire Rath, under the watchful eyes of a large herd of deer. A tricky river crossing required caution under heavy loads and tired limbs as the day's walking finished along the frozen banks of Abhainn Rath. Our second, and much needed, night of rest was spent at Maennanach bothy.

On paper, Day 3 could have been quite an undertaking - an 18km walk out along the length of Glen Nevis. However, with snow the consistency of caster sugar, walking was as effortless as one could hope for and under a cloudless sky of the deepest blue, we strolled through the valley, stopping occasionally to savour the silence and the most wonderful ice formations that lay on all side.

With a head count of only six other people encountered during the whole trip, it was a with a little regret that we emerged back into civilisation. The feeling was strong that we might never enjoy such good fortune as this for a while. But then, the sun always shines on the righteous . . .

The overnight sleeper train from Euston dropped us in the heart of the mountains at 9am. Our berths were booked in advance for the cheapest tickets. Our return from Fort William was made during the day, dispersing to various parts of England's south coast for a little under £35.79. However, a turn-up-on-the-day ticket would have set us back close to five times that amount!

If you don't know about them already, you really must join the Mountain Bothy Association. They take care of a wide variety of shelters in the upland areas of the UK, and rely on the support of their members (both financial and otherwise) to provide this fantastic resource. Prefering a softer bed and shower before the train journey home, we opted for a last night of comfort atGlen Nevis YHA.

While the summer is midge season in Scotland, the winter hazard of avalanches is far, far greater. Before travelling into the mountains, be sure in your abilities to cope with the increased risks and make sure you get the latest updates from the Sport Scotland Avalanche information Service.