The same place at a different time of year can lead to a very different experience...

Our original idea had been to nip up to Scotland for a few days. I'd already spent a pleasant afternoon scouring the maps, finally settling on a route that would offer a dusting of snow and a couple of new (to me, at least) bothies. An invite had been sent out to friends, and positive replies received. Then, I took a look at the Caledonian Sleeper website ... and discovered a distinct lack of reasonably priced tickets. Back in the days of the 'Bargain Berths' website, it was possible to get a single ticket for as little as £19. Now, despite looking three months ahead, it was going to be a little shy of two hundred pounds: quite a difference. 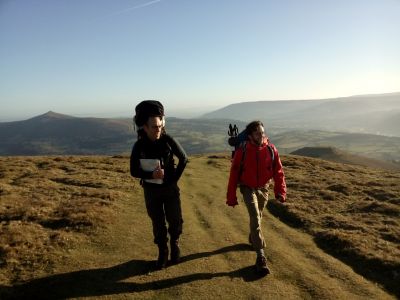 On to Plan B, then, and a revised tick list: somewhere cheaper to reach, the possibility of some snow, and maybe a bothy? Hadn't I heard about such a place, tucked away in the Black Mountains?

And so, after another flurry of emails to update the plans, four of us squeezed onto the commuter-filled train heading west from Bristol one weekday morning. While our carriage compatriots glanced over at us, their looks sympathetic and jealous in equal measure, we outlined a rough schedule. Flexibility was going to be key: the weather forecast was changeable and our only commitment was to the accomodation we'd treated ourselves to on the second night (that and a promise to be home by midnight on the third day to resume domestic duties). 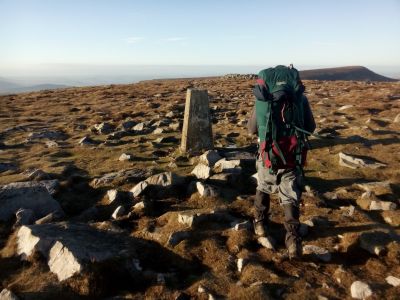 I do like a plan, but I also love 'winging it' once in a while. Which is fortunate, because as we reached Abergavenny bus station, our connecting bus was already disappearing over the horizon. The next bus was not for a while; and so my past experience of the town came in handy for the first time on the trip. We headed to a friendly cafe in the town to while away the time and stock up on our fat reserves. At least we now knew where the bus stop was.

Eventually, we reached Crickhowell. Starting the walk here would enable us to get to the furthest reaches of the Black Mountains and visit some spots that I'd not yet explored. But first we needed to leave the urbanity behind, and it was well past midday before our boots hit soil and gained any sort of elevation. Yet the delay proved a boon: as one of my favourite sayings goes, the sun shines on the self-righteous, and as we neared the summit of Pen Cerrig-calch (701m), we were greeted with clear blue skies and just the slightest warmth on the cheeks - not unwelcome in January.

Being a weekday, the hills were sparsely populated and we continued along the ridge, taking in the wonderful 360-degree views, on our own. Conversation was easy as my friends – hitherto strangers, only introduced to each other a few hours earlier – discovered their shared interests, including an obsession with the perfect cup of tea and the relative merits of their latest shiny piece of kit. Yet in the short days of winter, the sun sinks quickly and while we covered the ground as a decent pace, it soon became clear that our target for the night, Grwyne Fawr Bothy, was going to be unachievable. With temperatures dropping and the light finally disappearing for good, we unpacked our tents (essential kit for anyone heading for a bothy), got a brew on and hunkered down in a quiet little valley out of sight of civilisation.

By breakfast the next day, the crystal skies of the previous night had been replaced by rapidly moving cloud banks, which regularly broke into squally showers. The sub-zero temperatures in the valley remained, yet the smithers of warmth were gone. Our porridge was quickly consumed, tents packed up and we set off promptly for the day's first challenge - a wind-assisted climb up the slopes of Waun Fach. Our expectations for the day were unanimously low, and with metres of visibility in single figures, we trudged through the intermittent patches of snow near the summit. Onwards, but any relief in finding the clearly defined (and possibly over-engineered) path heading north-west soon dissipated as we learnt of the hidden dangers of frozen puddles nestling between the flagstones.

By the time we'd covered a couple of miles up high, we'd had enough. Tired of being buffeted while we danced on ice, we quickly amended the day's plan: "Wasn't that bothy you mentioned somewhere just over there, down that valley?"

Indeed it was and very welcoming too. Once inside the shelter, we retrieved our stoves once more to cook up some soup and more porridge. And, from the depths of one of our rucksacks, a Christmas cake was brought out. Along with a perfect cup of tea (they are always tastier in the great outdoors), we toasted the goodly volunteers of the Mountain Bothies Association in their absence. 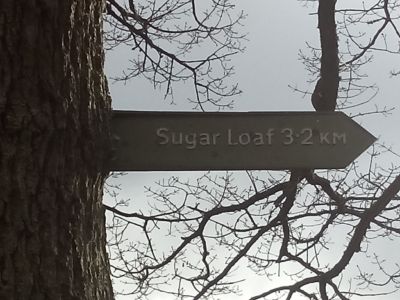 Once warmed, we continued, passing 1ft x 4ft piles of horse excretment neatly pilled along the length of the ridge – a particularly meticulous pony, a popular equine meeting spot or an overly fastidious farmer? – and continued towards Llanthony. On a previous visit to the area, I'd spied a lovely looking hotel-come-bar nestling in the grounds of Llanthony Priory and booked it for our last night. The landlord had kindly arrived early to let us in and we were welcomed to the offer of "something hot to drink", which we declined in favour of "something cold in a pint glass". And the creature comforts that evening were even more enjoyable after the efforts of the previous 24 hours, as anyone who has explored the wilds of Britain in winter will know. 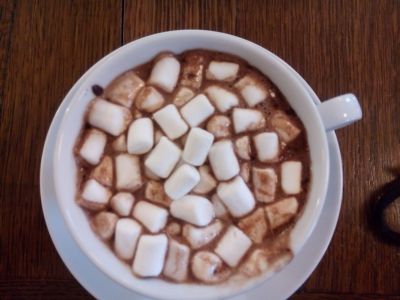 Day three, and a hearty breakfast set us up for the march along the Vale of Ewyas. Our bags were now lighter – especially the one now empty of its Christmas cake – yet our legs felt heavy, and the climb to the shoulder of Sugar Loaf was the hardest of the trip. Seeing the summit shrouded in mist made the decision easy; we discarded the top and headed for the view point of Twyn-yr-Allt. From here, all of civilisation lay before us. Or at least Abergavenny did, and we headed into town and sniffed out the wonderful Emmeline's Tearoom, a chance stumble that once again reminded me of that favourite saying...