Drewsteignton to Witheridge - 22 miles in the rain

Have you ever had one of those days on the hills, that when you think about the constituent parts it wasn't that special. But somehow the bits altogeter - the sum of those parts - made it great? This was one of those days.

Take the weather for a start. It rained, it stopped a bit, it rained some more. Quite a lot at times. No surprise really: this was autumn in Devon after all. 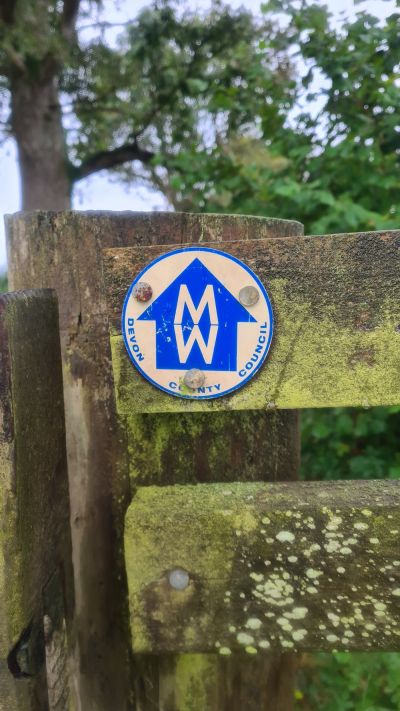 Another version of the Two Moors Way signage for the collection

And the route. Well... downs and ups, quite a lot across fields and a fair bit of tarmacced lanes. A two mile footpath diversion to boot - to enable the reopening of the Exeter to Okehampton 'Dartmoor Line', so we'll let them off - kept us on our navigational toes, but generally speaking this was pastoral hinterland of a fairly standard kind.

Then there was the mud. Not the claggy stuff that builds on the soles of your shoes so you gradually become an inch taller than you ever have been in your life. No, this was the kind that you spend the first half hour trying to skip around, eventually misjudge, get a boot full and give up, spending the rest of the day indifferent to the slop building up between your toes. 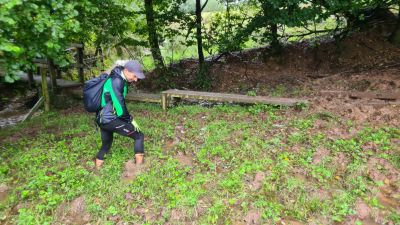 The distance was pretty memorable though. We had a plan A, B and C, the total distance decreasing accordingly and governed by public transport links. We powered through option C, had slowed somwhat by option B, but pressed on regardless to option A and the promise of hospitality at the end. However, a recurring theme of our Two Moors Way seems to be that of the closed pub, although this time it was less terminal and more to do with somewhat unusual opening hours for a weekend.

So there you have it - on paper, a fairly middling type of day. But it was the longest I'd ever attempted and although I'd been a tad concerned that my stamina wouldn't hold, by the end I felt I had a few more miles in my legs. And my pal and I hadn't really spent much time together for a while without the encumbance of children and DIY, so the distance felt shortened by the conversation. 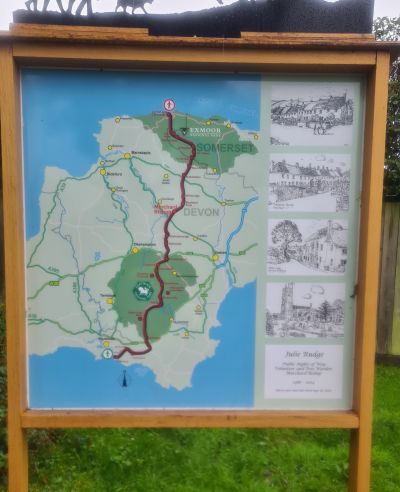 Then there was that sense of satisfaction when the travel logistics just work perfectly. Perhaps not something that someone using a car would consider a part of the trip, but for us attempting the Two Moors Way in sections using public transport, it was so very satisfying to get in and out with the minimum of fuss and bother.

Now I've lived down in Devon for a year and half or so I'm celebrating the climate and the wet stuff that falls from the sky. It is I guess what makes it such a green and pleasant land.

Drewsteignton is served by Dartline service 173 from Exeter. Alternatively you can catch the Stagecoach service 6/6A to Crockenwell and link up with The Two Moors Way nearby.

At the other end, Witheridge is served roughly every 2 hours by service 155 between Barnstaple and Exeter (timetable here needs a careful look). Alternative/shortened exit points are available by rail at Morchard Road or by bus from Morchard Bishop.

Anyone attempting the Two Moors Way in stages and relying on buses needs to know about the Stagecoach Explorer ticket which provides all day travel on their services for £8.30 (price correct at the time of writing).