Who said it never snows on the Isle of Wight?

Its size means many interesting walks are easily reachable, and the remoteness of many locations and the island itself mean many of the island's inhabitants rely on the local bus and train services. The train runs along the eastern side of the island from Ryde to Shanklin, with converted tube carriages meandering along quite frequently. One company, Southern Vectis, runs the majority of the island's buses and they are quite reliable - except when it snows. 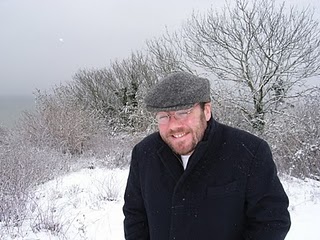 Before setting off for a January break on the island, I was told by a family member that 'it never snows on the Isle of Wight'. As we arrived at our cottage at the start of the week, laden with a rucksack each and some emergency shopping, a fellow bus passenger told us about the last time it had snowed on the island - the 1970s. But no one had reckoned with the cold snap that hit the UK over the new year, and the Isle of Wight certainly didn't escape. The good thing about all the snow was that we couldn't have used a car even if we had wanted to, so the walks we had planned were solely reliant on boots, backpacks and the emergency shopping.

Although unexpected, it was good to get some experience of snow walking as it is noticeably different to good weather trips. Progress is a lot slower than the average 3mph when you are walking through knee-deep drifts or negotiating downhill tracks with pockets of ice.

So we had to plan accordingly, bearing in mind how early it gets dark, and take extra food and water. And torches. My wind-up bicycle lamp did the trick. The snow also made it harder to find the way, with many signposts coated in thick white and the terrain difficult to relate to the map - roads, tracks and fields all look pretty similar under a blanket of snow. Fortunately some gregarious locals had written signs in the snow - much appreciated.

The Isle of Wight's climate is normally far more agreeable, offering excellent year-round walking, and even in January we noticed the temperate rising in the undercliff of St Lawrence on the southern side of the island, where the variety of plants and wildlife were still evident. A palm tree with its branches laden with snow is a peculiar sight in any part of the world.

It is also a haven for birdwatching and perhaps some residents were feeling the chill beneath their feathers, because plenty were about searching for sustenance. In Niton, we saw flocks of redwings, ravens, black caps and a solitary pied wagtail. On the coast near St Catherine's lighthouse, a buzzard was circling; near the Ryde ferry terminal we spotted avocets and gulls. And there were plenty of more familiar names too - tits, blackbirds and thrushes.

The Isle of Wight is a great learning ground for the novice walker, because of the pleasant temperate climate and the (usually) well-signposted routes. The excellent bus and train network make it ideal for the car-free walker. And the impressive number of pubs, accustomed to catering for people with a friendly welcome and pint of a local brew, make it perfect for all kinds of walker.