Through the heart of the capital

Think ‘canals’ and Amsterdam or Venice come to mind. But London’s vibrant waterways are just as impressive; overlooked only because there is so much else crammed into the capital. A day wandering the banks gives you a glimpse into their industrial past and a chance to share in the recreational present.

The Grand Union Canal, one of the city's key waterways, weaves through the east of the city. A friend suggested this walk to me many years ago, so on a sunny spring day I took the train to St Pancras, sitting halfway along its course. It’s a fine start to any car-free walk; now fully restored to impress those arriving on the Eurostar, there is no finer station in the capital. It is a magnificent sight, both inside and out. If you’ve not been before, take a peek in the terminus before you leave, especially the dramatic arching roof. 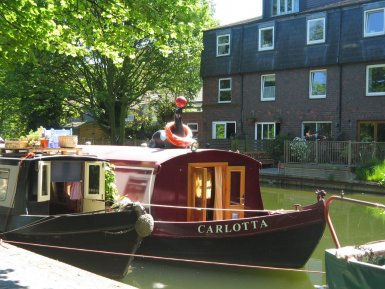 Despite the GU canal passing directly behind St Pancras, my A-Z failed to show that it is not actually possible to join the towpath here. Cue a half-hour meander through Islington’s streets, trying not to look too much like a tourist as I kept rechecking my book. After a short-cut through Chapel Market, I joined the canal finally just north of Angel tube station.

Turns out the canals are not as overlooked as I thought. Joggers weaved impatiently through crowds, headphones in and eyes focused; kids were carried or pushed along the path by their parents, the dads outnumbering the mums (hey, it is north London), and fishermen (just men; no breakdown of gender stereotypes here) tried to ignore everyone. The open-air cafes are a welcome attempt to enjoy the warmer temperatures, but tend to take up a little too much room on narrow paths originally built for horses.

One surprising aspect is how many people live on the canal. Most stretches were lined with houseboats, each with its own densely-packed herb garden and unique colourings.  And these water-dwellers have adopted another European habit – topless sunbathing. I hurried past staring at the floor with traditional British awkwardness.

The many building-side advertisements also caught my eye, painted on the side of the derelict canal-side buildings. These notices nod to a time when the canals were the industrial veins of the city, and the banks were lined with wharfs and warehouses rather than latte macchiatos and Baby Bjorns. ‘Ron’s eel and shell fish’ shop struck a particular note with me, concocting images of jellied eels and other legendary Cockney delights. The fish illustration amused me in particular, its expression suggesting it was fearfully heading away from the huge prawn at other end.

Beyond Victoria Park and Mile End Park in Hackney, where yet more people were shedding clothes with Mediterranean abandon, the skyline becomes dominated by the remarkable buildings of Canary Wharf. These come as something of a jolt after the almost countryside bon viveur lifestyle of the canal banks beforehand. I headed towards them as they sparkled in the May sunshine, finishing at Limehouse Basin where the canal meets that other great London waterway, the River Thames.