Round the edge of the big city 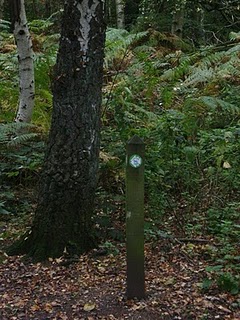 Walking boots, check. Scarf and woolly hat, check. Oyster card, check. Swipe card for work ... I'll leave that one behind today. It feels odd donning waterproofs on a weekday morning, but the occasional midweek day off is one advantage of working shifts. I decided to take advantage of the (admittedly weak) autumn sunshine to try out a car-free walk in London, ideal with its extensive public transport network.

A friend recommended the Pymmes Brook Trail but it was just a little too urban for me (and goes right past my house) so we decided to brave the world beyond zone three and devise my own walk, taking in part of the London Loop. As a nearby urban walk, it was also a good opportunity to test out what kit I really need, in preparation for more arduous routes where the nearest chemist is more than half a mile away. Compass, plasters, water and cash are always essentials; a good book and a banana protector are perhaps urban luxuries.

The familiar walk to the tube felt different, not just because we were wearing boots rather than smart shoes. It was the prelude to a day of fresh air and adventure, rather than another day in the office.

Cockfosters Station raises a titter among more juvenile Londoners, and has been doing so since the 16th century. The name possibly derives from cock breeding in the area, or that it was once the home of the chief, or cock, forester. The train was littered with discarded Metro newpapers, but instead my required reading today was OS173, which covers North London. Cockfosters wasn't the only name on the map to raise a smile; we also enjoyed the hilarious Ferny Hill, Rough Lot, Cuckolds Hill, and Noddin's Well, to which the response must be 'Really? I didn't know he was ill'. 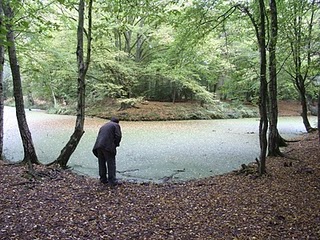 The route began in the inauspicious surrounds of Cockfosters tube station cark park, and we'd gone barely 10 metres before the map and the compass were out of the 'essentials' list, for urban walks at least. The problem is the number of signs, buildings and landmarks, making it impossible to head west for 100m without walking into a wall. (For the record, turn right out of Cockfosters tube into the car park. There's a green gate on the left signposted 'London Loop', which takes you on to a path that circumvents the cemetery.)

Luckily, we were soon in open fields, woods and parkland, with the distant hum of the M25 largely drowned out by the cawing of crows, jays and magpies. While not the most exotic of species, it was a treat to see a variety of wildlife so close to my urban home, including wood pigeons, grey squirrels, rabbits, green woodpeckers, a crow the size of a chicken, great tits, a flock of starlings, a grey heron and three cock pheasants during the walk.

Passing an impressive, though deserted, children's playground on the right, we crossed into Trent Country Park. Stopping at the entrance cafe for a sneaky slice of carrot cake - another lesson learned for trickier walks: eat breakfast first - we then continued along the London Loop. It is no doubt busy at weekends, but we had it largely to ourselves this Wednesday. 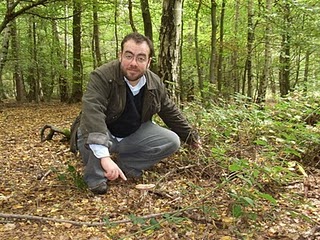 Passing lakes on the right, home to herons and ducks, we began the gentle climb up Camlet Hill. We made a slight detour north to see Camlet Moat, a 15th century island with a shallow moat where a drawbridge and weaponry dating from Roman times have been found. It's reputedly haunted, and is certainly eerie, not least because the algae covering the water makes the moat look like a road, and it would be easy to succumb to the water's depths on a dark night. The woodland surrounding the moat is rich in toadstools, including the fly agaric, easily recognisable to Noddy fans as Big Ears' home. We saw at least 10 varieties, enough for Noddy and Big Ears to climb the mushroom property ladder.

On exiting the wood, the path follows Salmon's Brook. The water still flows but is too shallow to harbour much in the way of fresh fish these days. The London Loop continues up Cuckolds Hill, but we took a detour north on a footpath alongside deeply ploughed fields to the Robin Hood in Botany Bay, a McMullens venue. More of a dining room than a pub, it was nonetheless homely and serves food from noon, making it a great spot for a late lunch (the carrot cake had long since worn off). It serves pub classics, plus a large chargrill and fish menu, platters to share and at least three hot vegetarian choices.

The Ridgeway which leads out of Botany Bay towards the outskirts of Enfield is the least attractive aspect of the walk, (nb you can catch bus 313 here to and from Potters Bar) as the road is busy, picking up the traffic turning into London from the M25 and the North Circular. But the ridge provides good views, with the television mast at Alexandra Palace and even the towers of Canary Wharf clearly visible to the south. 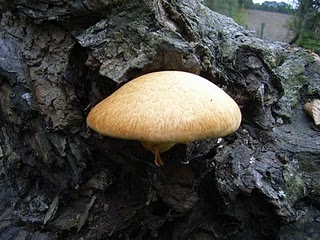 The road dips and climbs, and just beyond the Royal Chase hotel we rejoined the marked path, which heads north to Rectory Farm, home to some timid bullocks and friendly horses, and the red house, then under a railway bridge. You can extend the walk by heading north from St Johns church, but instead we opted for a leisurely pint in the quiet but welcoming Fallow Buck, and were treated by a couple of jays noisily flapping about in the trees opposite. We meandered through the estates to Gordon Hill train station for a short ride home, pitying the commuters surging out of London in the opposite direction. Pubs, walking and some urban wildlife - a perfect London day off.

Words and picture by Penny Woods