Wembury to Ivybridge on the Erme-Plym Trail

It was back in February that I picked up a leaflet in my local library publicising the Two Moors Way. I recalled seeing signs for this during previous walks in the area but hadn't much of an idea about the route in its entirety. Now, having just moved to South Devon, an opportunity to take on a new challenge whilst getting to know a bit more of the county had presented itself. 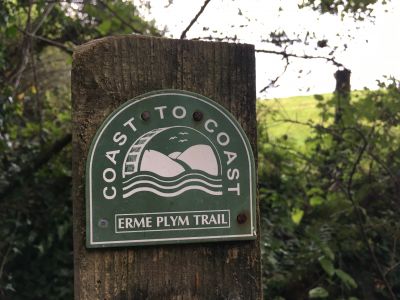 An example of the (mostly) excellent route signage

Not being able to abscond from family duties for the 6 or 7 days necessary to complete the entire route in one trip, I started to schedule how I could complete the sections one day at a time over the coming few months, travelling car-free from my new base. A good friend from out of the area promised to accompany me on days when he could and the first date was set for early March.

So it was that five months later than scheduled I was in Wembury on an early Autumn weekend at the start of the Erme-Plym Trail - the more recent addition to the route that allowed it to claim full 'coast to coast' status. After a quick ceremonial paddle in the sea and a trip to the National Trust cafe to get my first official route stamp, I set off on the 15 miles across the South Hams that are a precursor to the harder, wilder terrain to follow. 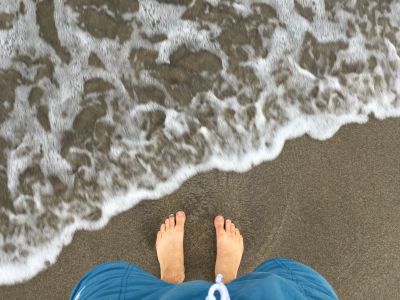 Ceremonial wetting of the feet at the start

Being the first time out exploring new ground for a while, there was a need to reacquaint myself with the skills of navigation. Hoping to rely on the waymarkers and footpath signs, I had packed my map away to avoid the ominous spots of rain that were starting to fall. However it wasn't long before I found myself off-route and in need of the trusty OS map to get me back onto the intended path. After 30 minutes or so I found my rhythm and the miles started to tick by. 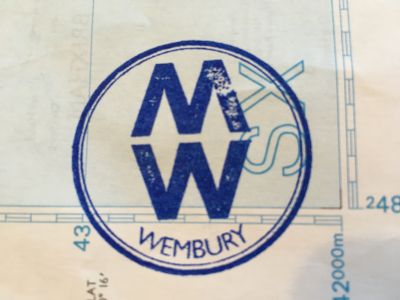 The official route stamp from the NT cafe at Wembury

In short, I would best describe the route as pleasant and not too challenging. The terrain is 'rolling', with a mixture of pasture, woodland and a fair few sections of road - mostly quiet back lanes but with a couple of rather 'sketchy' road crossings. The definite highlight of the day was spotting three herons awaiting their lunch at the beautiful Cofflete Creek. 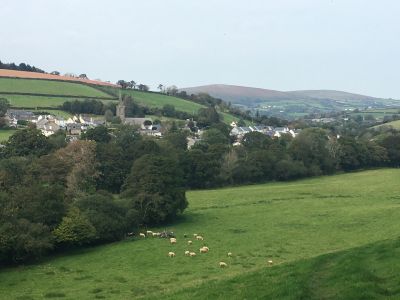 View north near Ermington - famed for its crooked church spire

A dozen miles in, the first proper glimpse of the southern slopes of Dartmoor presented itself - lying in store for me in a few weekends' time. For now, the final stretch into Ivybridge passed with little to note and I was soon on the bus back home. From the top deck, I could see that Day 2 will take a little longer!

Wembury can easily be reached using Plymouth City Bus number 48. The most regular bus service to and from Ivybridge is the Stagecoach Gold, while mainline trains occasionally stop at Ivybridge Station.

The Two Moors Way website has plenty of useful and up to date information, whilst the excellent Cicerone guide to the route provides further detail for armchair planning.