Getting your head down on the move

Some people might think it unwise to plan a trip to the hills more than two days in advance, let alone two months. But being southern in address, frugal by nature and a non-driver by choice, there is little I can do but throw caution to the wind and commit to the uncertainties of the Scottish weather and plan my adventures early. So on the last day of the stag stalking season, two friends and I from the deepest corners of England’s home counties converged at London Euston to catch the evening sleeper train heading north.

For anyone not familiar with the sleeper, it is nothing if not enjoyable. We lounged in leather sofas while being served cold beer and poring over maps of far-flung lands (in this case OS Explorer map 429) before retiring to our snug bunks, the gentle 80mph perfect for rocking us to sleep. Then in the morning, a cheerful knock at the door and a hot coffee in bed, served in good time to rouse oneself from gentle slumbers and be deposited, early in fact, at the destination of choice.

So it was at 8.30am on a Friday morning, we found ourselves at Inverness station immersed in a misty drizzle. The short interval before our onward train towards Kyle of Lochash allowed little opportunity to source the full-cooked breakfast of our slightly inebriated dreams, meaning a station concourse special for us – flimsy cups full of sausage and beans with disintegrating bags of half-buttered toast. 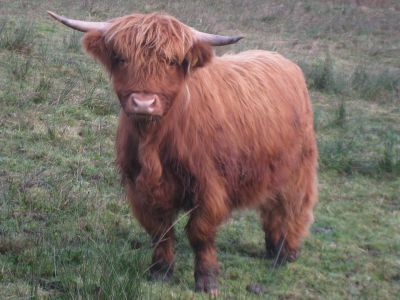 Achnashellach Station in Glen Carron is a request stop on the line towards Skye. It appears to serve little in the way of foot traffic, but provides an ideal access point to the hills around Loch Monar. With a spring in our step we headed south to the first great obstacle. Note to following parties – we thought that fording the River Carron was possible at the point that the crow would fly, or alternatively, that the footbridge upstream at Craig would still exist to allow our safe and dry passage. We were wrong, twice. Thus, two hours later than planned we finally gained the footpath up through Achnashellach Forest, meandered heavily below Carn Mor and sweated up over the steeper slope of Aon Cheum. Dutch Rob in particular struggling having foolishly agreed to carry the weekend’s supply of fuel. Us, we remained quiet and deferred to injuries of old. 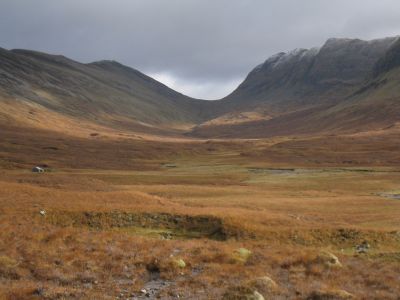 From the top plateau, the first views of the next days’ itinerary revealed a covering of light snow above 700 metres and the first fleeting glimpses of some blue sky above. More immediately, the gentle descent path was located amongst the lochan and we followed the steep-sided stream to the bothy on the valley floor below.

Apparently Bearnais was once considered the coldest bothy in the land. Instead, we found a warm, welcoming, wood-panelled and immaculately tidy place that with some logs in the burner and a brew on the go soon became our home in the hills. Conversations and reminiscences flowed as we waited for company, but nobody came and we were left alone to the joy of shared provisions and a peaceful early night.

The next day broke to a calm sky with a hint of late autumn sunshine. Much excitement too with Dutch Rob’s discovery that, according to the bothy book, roughly a quarter of recent visitors hailed from his motherland – the reasons for which we pondered as we burnt off our breakfast of oats across the flanks of a nameless hillside to gain the crest of the path at the head of Bealach an Sgoltaidh. There, a wall of indistinct purpose points the way to the steep zigzagging path through the two-tiered north face of Bidein a Choire Sheasgaich. But with the instructions of a better half still ringing in my ears, the intended scramble ascent was soon abandoned due to thick coatings of ice in inconvenient places and we opted instead for a path of least consequences to gain the summit for an early lunch and views of coffee-table book proportions.

Onwards we went, descending to the saddle and climbing the broad slopes of Lurg Mhor. However, the ice made the traverse towards Meall Mor a little more awkward than some group members could stomach and so, at the chilly shadows of the final exposed step, fear overcame valour and an alternative route was found. This took us down to the shores of Loch Calavie and the sanctuary of the clearly defined and sun-bathed footpath towards Bendronaig Lodge, veering on to Loch an Laoigh.

As the light faded, we bowed our heads to the laws of fate whose wisdom in curtailing our summit push a few hours earlier had better judged the tiredness in our limbs. We slipped, slithered and hopped across the flat boggy lands to the still silent and empty Bearnais bothy for a peaceful night of dice games and cheap corner shop whisky.

Sunday arrived late in the warmth of our sleeping bags, but still without a soul in sight, we bade farewell to Bearnais with promises to return. Following the footpath heading southwest, we steadily climbed to reach the anonymous pass offering stunning views across to Torridon and Skye. At the waterfalls of Eas na Creige Duibhe Moire, we ambled on, hearing but not seeing in a shameful haste to cover the distance quickly. At Achintree it is only a short walk back to the station at Strathcarron from where the return journey could be made. However we’d planned another night in Lochcarron, where the adventure continued, but one of less glorious a story than should grace these pages.

This is a copy of an article soon to be published in the newsletter of the Mountain Bothy Association.

Words and pictures by Gary Shipp.