Three hills in a day

A hill that fails to top 200m barely counts as a day out; you could probably squeeze it in before breakfast. But stitch three of them together and it looks like more of a challenge. Throw in some sand dunes and one of the world’s top ten beaches and you have the ingredients for a mini classic.

Cefn Bryn, Llanmadoc Hill and Rhossili Down are the highest points on Gower, the peninsular that sticks out from under Swansea’s nose. It’s a place filled with wild ponies, precarious cliff-top paths and tiny villages that screams ‘miles from anywhere’ – and yet it’s just a one-hour bus ride from the city. This accessibility is a major benefit, although it can get busy with walkers and surfers in the summer. But at 8.00am on a spring morning, Patrik and I were the only souls in sight as we plodded up the slope of Cefy Bryn from Penmaen. 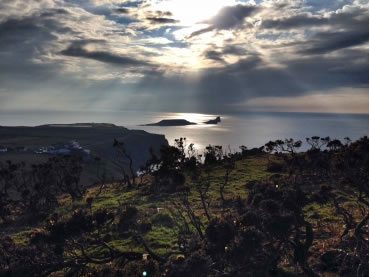 The name means ‘ridge hill’ and the high ground stretches for nearly four kilometres. Near the first trig point, we passed a herd of Gower’s ponies enjoying their breakfast. Their unremitting chomping stirred our stomachs, despite the porridge enjoyed at our overnight camping spot, and we detoured from the ridge towards Reynoldston for a fry up in the King Arthur Hotel. It was only 10.30am and already we had ticked off the first hill, some wildlife, and a second breakfast. That’s another perk of Gower – it’s small enough to devour in a day.

Our route took us back over the western end of Cefn Bryn and through fields that the resident cows had turned into a quagmire. Llanmadoc Hill lay just ahead and another short climb took us to the summit. The views across Whiteford Burrows towards Llanelli and the river Loughour were spectacular but short-lived: a shower urged us back down the hill under the shelter of hoods.

The sun was out again by the time we reached Broughton Burrows, a sprawl of sand dunes on Gower’s western tip. Caravan parks have crept as close to the dunes as possible, but once inside this maze of sand and Marram Grass, it felt like a land untouched. As a sixth-form biology student, I had to traipse through this ecosystem studying the insects and vegetation with a quadrat. Today, we could lie back on the sand with some cheese, biscuits and last night’s unfinished wine. There are a few perks to being an adult.

Like all the best variety shows, Gower keeps its star turn until the end. Rhossili beach has long been beloved by surfers, but it had recently been named as one of the world’s top ten beaches. This is quite an accolade; I was itching to see it for myself.

The beach was tantalisingly hidden from view as we emerged from the dunes. But we arrived on the sand to find a grey sea lapping against old bits of surfboard, discarded fishing nets, and several rotting sea bird corpses. Could this be right? Did this mess of human waste and natural carnage really beat off sun-kissed paradises in Thailand, Greece and the Caribbean?

Feeling slightly disheartened, we meandered through the Hillend campsite towards our final hill, Rhossili Down. This is the highest peak at 193m and, coming third on a day that by now was feeling long, the hardest. It was also the most rewarding. As we peered over the top, Gower played its trump card.

The curve of Rhossili Bay looks truly vast from up high, stretching from the sand dunes at the northern end to the tidal island of Worm’s Head standing proudly to the south. Black-suited surfers dotted the waves, sleek enthusiasts who brave the temperatures even on the briskest days. And the sea birds that had yet to succumb filled the sky with their calls and whoops. The dropping sun gave the scene a serenity that made it easy to see how this beach had swayed the judges. 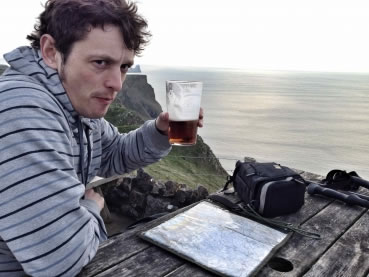 The Worm’s Head provides an epilogue to this walk at low tide, but today the waves crashed and frothed violently around its edges, denying passage to all. Instead, we ordered some pints of more tranquil froth in its namesake hotel. A second and a third swiftly followed, one for each of Gower’s hills – and every drop fully deserved, even if they are all tiddlers under 200m.