Wild Walking in the northern Cambrians

Largely neglected by walkers because of its proximity to National Parks both north and south, the scenery of the northern part of the ‘Elenydd’, the Cambrian Mountains of mid-Wales, is nevertheless wild and stunning. Although the Ceredigion Coast Path is rightly becoming recognised as a wonderful experience, I wonder how many walkers, wending their way through the holiday crowds on Aberystwyth’s promenade, know what they are missing a few miles inland? Even in high summer you leave the crowds of Snowdonia behind you here, very rarely encountering fellow walkers. 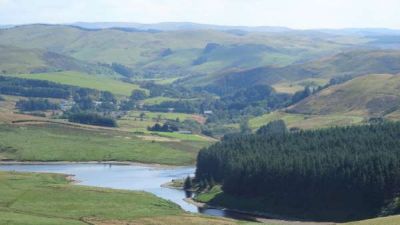 The village of Ponterwyd is a great centre from which to explore this superb wild country. There is a frequent bus service (X47, taking about 35 minutes) from Stand 3 near the main train station in Aberystwyth (train services to and from Shrewsbury and Birmingham). The village itself has a well-stocked general store at the petrol station, as well as the characterful George Borrow Hotel (named after the pugnacious early 19th Century travel writer, author of the aptly titled ‘Wild Wales’), which offers accommodation, as well as a bar and restaurant. 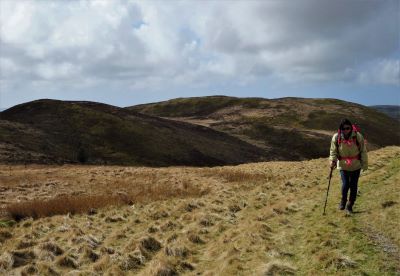 Wild walking above Ponterwyd…near point 5 on the map

In this area, with fewer developed and well-known routes, it is a good idea to have some detailed guidance for specific walks. My new and developing webpage highlights routes to off-the-beaten track places, visiting more remote hills and open country. There are also some shorter and physically less challenging routes - wildness for the wary and slightly weary!

Soon to be added to the site is a car-free walk that starts at the second of X47 bus stops in Ponterwyd (Maes yr Awel). The route heads south-east and goes over Pen Dihewyd (513m) and the neighbouring hills, with a possible extension to Draws Drum (570m). 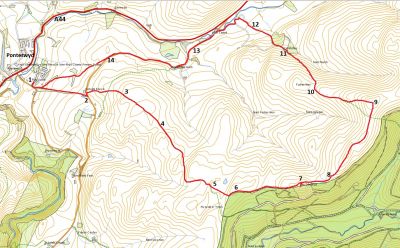 To the north, the quiet mountain road to Talybont takes you into hill country featured on my website, including the Dinas hill fort, Disgwylfa Fawr, and Llyn Syfydrin. To the south there are paths over Bryn Bras, down into the upper Rheidol gorge at Ysbyty Cynfyn (Parsons Bridge) and on to Devil’s Bridge. Two kilometres east of the village at Dyffryn Castell is the start of one of the longer routes on Pumlumon Fawr and Y Garn.

Just before arriving at Ponterwyd, there is bus stop very near the popular walking and mountain biking centre at Bwlch Nant yr Arian, where the red kite was saved from near UK extinction.

Maurice Kyle is a retired school teacher, brought up on ‘wild’ walking from a young age. He is a member of the local Ramblers, and lives near Aberystwyth.