A wet walk in Suffolk

Sometimes even the bad days can be good

It was all planned perfectly. A winter walk near Suffolk’s River Deben, with clear blue skies, a crisp frost underfoot and a pint in a country pub to finish. The perfect way to spend New Year’s Eve with the family. 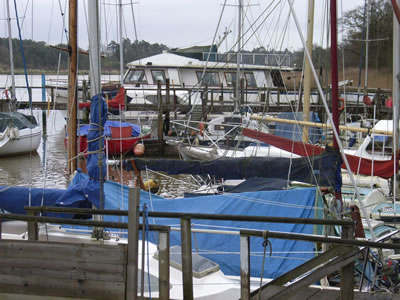 But as with most of the UK, the weather on the last day of 2012 was typical rather than traditional. As we arrived at Martlesham, the sky was a dull grey with a healthy dose of drizzle. The weeks of rain in December meant that the woodland path from the village was sodden; rather than the crinkle of snow underfoot, each step was rewarded with a squelching fart of mud.

At least the wildlife was doing its bit. My sister and brother-in-law, both keen birdwatchers, spotted long-tailed tits among the bare trees. And the pungent mud banks of Martlesham Creek had attracted several wading birds. The masts of the boats, rattling in the light wind, added the soundtrack and suddenly the walk began to take shape.

For a few more metres at least. Our plan had been to walk to Waldringfield along the River Deben. But while muddy banks are great larders for wading birds, they don’t make good footpaths. Our route had long since been eroded, according to the notice on the path. Never one to take an official sign at face value, I pushed on a little until the gorse took over – clearly this hadn’t been a usable footpath for quite some time.

We retreated back along the creek and took a path into the village of Martlesham. The village has an attractive brick and flint church, typical of those found in Suffolk. A brief look inside sufficed; the drizzle had seeped through clothes and the pub was calling.

The Red Lion in Martlesham no doubt has a loyal bunch of regulars who enjoy its charms. But any pub that claims it is ‘proud to serve Costa Coffee’ sets me off on a bad footing. And – the final injustice of the day – my pint of Doom Bar bitter was chilled when served. 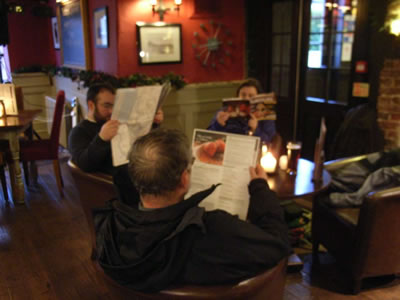 A genuine dilemma; should I send it back or just drink it? I considered the situation: muddy boots, woolly hat, an OS map draped around my neck; complaining about the temperature of the real ale would have made me too much of a rambling caricature. Instead, I resigned myself to warming it over a candle while quietly grumbling about the lack of snow. You can remedy the temperature of your pint, but there’s little to be done about the weather.