Ivybridge to above Scorriton on the Two Moors Way

It was hard not to feel a little blessed as I waited for opening time at The Watermark in Ivybridge. It was the first day of October, I had a day off work during the week and had been lucky enough to choose one in the calm before the first of the season's proper named storms. With a coffee in hand (and a doughnut for the energy), I had time to take a look at the map properly to fathom how to make the best of the day. 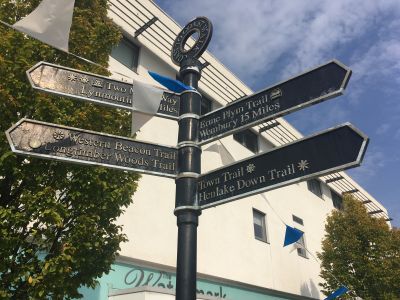 Outside The Watermark in Ivybridge

After the preamble of the Erme Plym Trail the other weekend, this next 40 or so kms of the Two Moors Way was going to be a bit more logistically challenging. The official guide to the route suggests the village of Holne as the point to aim for in a days walk from here. The difficulty being that Holne only recieves a bus service once a week, on Wednesdays - yesterday. But as the old adage goes, every problem has a solution, particularly when the sun is shining.

As expected, the first half hour or so were a little on the stiff side as the route quickly ascended out of town past the Dartmoor National Park boundary marker at Stowford Bridge. With legs and lungs warming up, I made my way by a lovely green lane to emerge onto open moorland above. With an ever expanding vista behind, I made my way round the flanks of Butterdon Hill and paused for breath. 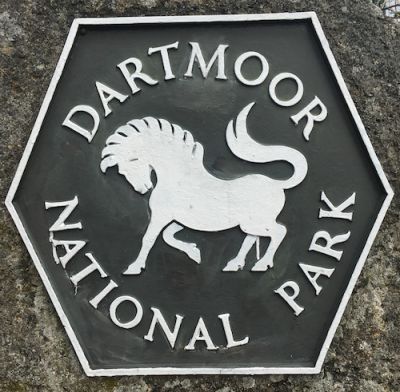 One of the beauties of this section of the Two Moors Way is that there is no one path to follow and you can make your route choices depending on energy levels and weather conditions. The easiest way to navigate is the 'Puffing Billy' trail - an old tramway used by miners to transport china clay from Red Lake Quarry, but the sometimes circuitous route can be straighened out and some more adventurous walking had. A small and worthwhile diversion is to Sharp Tor where, from the westerly outcrop, you'll be treated to a beautiful view over Piles Copse and the valley of the infant Erme. Across the Way, the summit of Three Burrows offers fine 360 degree views and an opportunity to trace the route almost all the way back to the coast at Wembury. 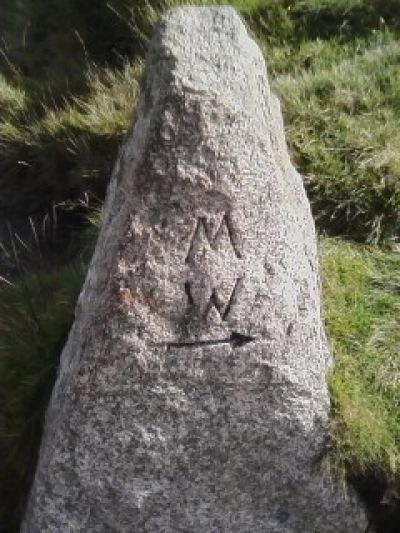 Still basking in autumnal sunshine, I took a breather at Left Lake, recalling a wild swim I'd taken here with some pals a month or so back. But I loitered too long and as the first clouds of the day scuttled across the sun, I felt a seasonal chill. Back on the track, the miles passed quickly as the surroundings became increasingly remote. Within sight of Red Lake spoil heap (AKA 'the Dartmoor volcano') a marker stone points off across a stretch of open moorland where cautious navigation is required to locate the steep and often slippery descent to the clapper bridge at the foot of Huntingdon Warren. Out of the wind and in the sunshine, it was a great spot for a late lunch whilst admiring the beautiful shades of reds and browns spreading across the hills. 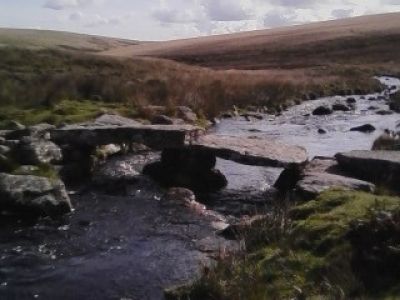 The clapper bridge below Huntingdon Warren

With the bus at Holne not an option today, the closest public transport from here is from the village of South Brent, 10km distant but almost entirely downhill. Whilst a shorter, more direct option follows the banks of the Avon, I opted instead for one last meander. Ascending Gripper's Hill to the boundary stones fringed ridgeline, I was greeted by a most fantastic vista. To the right lay the South Hams in all their glory, whilst ahead I could make out coastline - perhaps even across to the estuary of the distant Exe. Looking north east, I could follow my future route through the valleys of the Dart towards Widecombe and beyond.

For now I headed in the opposite direction, following the boundary line below Dockwell Ridge and eventually, by way of some minor paths and quiet lanes, all the way into South Brent. The bus stops on the outskirts of the village, along the B3372, so take the opportunity to grab some refreshments at the various shops, Station House cafe or Packhorse Inn on the way through.

Arriving home, I put the kettle on and checked the weather forecast to find that the first signs of Storm Aidan's approach were due in a few hours time. "The sun shines on the self-righteous" commented my wife.

Both Ivybridge and South Brent are served by the Stagecoach Gold (Plymouth to Torquay) and X38 (Plymouth to Exeter) services.