Withypool to Lynmouth on the Two Moors Way

In contrast to the darkness and drizzle the night before, the final day of our Two Moors Way challenge dawned bright and clear. Having eaten well, drank sensibly and slept early, we were surprisingly refreshed and ready for the final push. The plan had been to set off earlyish to make sure we had time to cover the miles and connect with the bus out, but we overindulged somewhat on a feast of a 'full English' and stalled departure to allow a degree of digestion.

Having managed to dry most of our kit on the radiators in the room, putting on shoes we'd abandoned at the pub entrance was a little bit of an ordeal. However, accepting that they'd have been wet and muddy in a matter of minutes anyway, we instead thanked the weather gods for their blessings and headed up the road, 'route one'. A mile or so later and a hundred metres higher I was seriously regretting the gluttony of my double helping of black pudding. . . 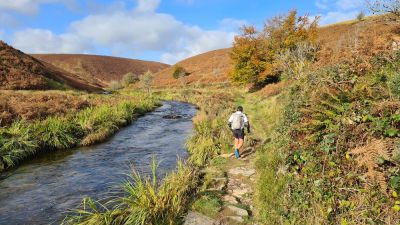 What followed for the next hour or so was the most glorious stretch of the whole of the Two Moors Way route. Having gained height relatively quickly we were treated to magnificent views across the valley of the Barle to Withypool Common and beyond. Then, after plunging downhill we joined the river once more and followed it's banks: open, sun-drenched and warming us through.

We stopped occasionally to refresh and take in the full beauty of our surrounds. The autumn colours were in full ascendancy, and whilst the map and my expectations suggested the area might be barren, there were plenty of trees around to put on a seasonal show of splendour.

At Simonsbath we bid farewell to the Barle and headed northwards through scarred plantation and boggy ground, gaining another vantage point from which we were sure we could spy a hint of the sea. At Dure Down (480m) the hint was confirmed and we set off at a relative gallop across Exe Head and down towards Hoar Oak Tree. Feeling like the hardwork was behind us, we rested perhaps too long and as we laboured across the flanks of Cheriton Ridge, we started to wonder if our travel plans were a little optimistic. Heads down, stretching things out, we arrived at Hillsford Bridge just about on schedule but with the 'tanks' emptying fast. 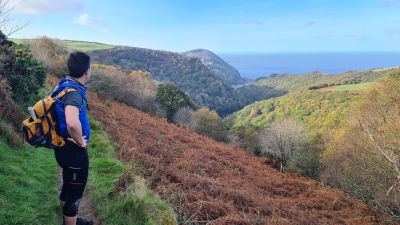 The final miles, not all downhill

The final couple of miles would have been brutal coming the other way and to be honest weren't easy in this direction. In the comfort of my lounge I can now see the hidden bunch of contours that eluded my attention on the day and led to concern we'd somehow gone off route when they appeared out of nowhere in full 3D version. But I can also say now that every step back up was worth it for the magnificent views to the cleaves and the coast and the hillsides all around.

We arrived at Lynmouth with just 10 minutes to spare. I headed straight for the sea for a ceremonial dipping of the toes but low tide put paid to that and I made do with a rinse in the final waters of the Lyn.

Words by Gary. Images by Gary and Yousaf.

Thanks again to staff at the Royal Oak in Withypool for the friendly welcome and comforts.

The fantastic Exmoor Coaster offers a (mostly) open top service from Lynmouth to Minehead, connecting with Service 28 to Taunton and mainline rail links to Bristol, the Midlands, London and Devon/Cornwall.

Visit the Two Moors Way website for information about the full route. Check out our Blog for the previous six stages.