A fine-looking mountain in Lochaber

Stob BÃ n is a fine mountain. Itâ€™s certainly handsome: a pointy, steep-sided Munro that retains a cap of snow long into spring most years

And its location halfway along the Lairig Leacach means it has another attribute that every fine mountain needs: a fantastic walk in.

Heading out from Spean Bridge station, on the West Highland Line, I trudged along the road by the River Spean, gurgling impressively in nearly full spate. This leads to the hamlet of Insh, about 45 minutes in; all pleasant enough. But once I started heading south along the Allt Leachdach, the real fun began. Cruach Innse and Stob Coire Gaibhre act as the gateposts to one of Scotland’s finest mountain neighbourhoods – beyond these sit the Grey Corries, the Easains and the Mamores. And carving through the middle of them is the Lairig Leacach.

The path along this vast glen is an ancient cattle drovers’ road connecting Loch Trieg and Glen Spean. It climbs steadily beneath Sgurr Innse towards the highest point of the pass, where the Leacach bothy is located. This makes a good overnight base if you split the walk over two days. It’s also the starting point for the ascent up Stob Bàn, a southern outlier of the Grey Corries. 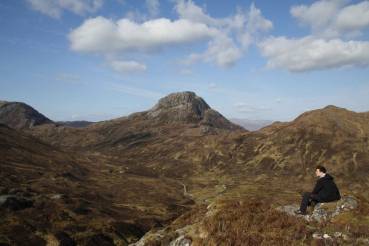 My friend Stevie and I followed the Allt a’ Chuil Choirean upstream from immediately behind the bothy, heading for the col between Stob Bàn and Stob Choire Claurigh. A path heads from here up the northwest face to the summit. A short but steep climb took us up to the pointed peak, and the reward was a magnificent view of the surrounding ranges, as well as along the Lairig Leacach itself.

After returning to the bothy, we headed south once again. The path forks just beyond the bothy, with the high road leading southwest towards the Mamores – another walk for another day. We stuck to the riverside path that meanders between the giant Stob Coire Easain and the humbler Meall Mor. Beyond the deserted Creaguineach Lodge, we crossed the wooden bridge that straddles the Abhainn Rath.

If the Munros of Lochaber are impressive from the Lairig Leacach, they are even more majestic reflected in the waters of Loch Treig. It’s possibly my favourite view in Scotland; it’s a struggle to recall a finer sight on a clear blue day. 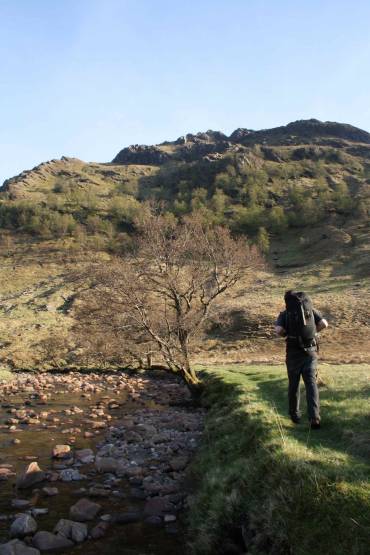 The path along the loch’s southern shore took us back to the West Highland Line. Here, a bit of prior knowledge came in useful. We left the path before the bridge and picked up the boggy path that sticks to the western side of the railway – it’s a more direct route to Corrour station, and a bit more fun than the track.

The train is the only way out from Corrour and on the journey back north, the train clings to the steep scree slopes above Loch Treig. The Easains prevented any final glimpses of Stob Bàn or the Lairig Leacach, but the memories were still fresh, and the steaming coffee cup fresher still. 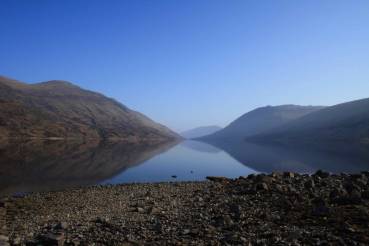